The International Association for
Disaster Preparedness and Response 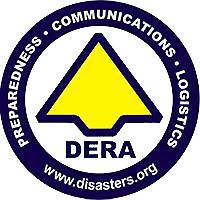 Our Facebook Group DisasterCom contains contemporary articles from around the world. We encourage everyone to post items in the group.

Our LinkedIn Group — The International Association for Preparedness and Response will have posts and an open dialog is encouraged.

Newsletters (see below) – This section includes archives of the DisasterCom newsletter.

Links (see below)– Helpful links that we have uncovered. We encourage members to submit additional links for consideration.

Monographs (see below) – Long and short form articles submitted to DERA for consideration to be included on the site and indexed with search engines.

DERA Mission Refocus
New Membership Structure with Reduced Dues Rates
Changes in Fire Patterns across the Globe by Georg Grosse-Hohl
Catastrophic Disasters: Why Prepare? by Lee Champagne, CEM
Loud and Clear: Getting the Message through to Those Who Need to Hear by Stefan Pollack

Keynote presentation by William Haggard: The Realities of Climate Change for Emergency Managers

Faith Based and Compassionate Disaster Response by Catherine Stevens, K4ECM

The Politics andFinancing of Search and Rescue Operations by Kevin J. Dunlevy-Wilson

A Student’s Perspective on Emergency Management Education by Mark Phillips

A New Look at Individual Abilities in Disaster by Pattijean Hooper, PhD

Thanks to Bill Liebsch and Janet Liebsch for DERA Project Support

Message from the Chair by Howard Pierpont

Thanks to Bill Liebsch and Janet Liebsch for DERA Project Support

Reminder Flags for Your Personal Go-Kits by Howard Pierpont

A Personal Look at Tragedy by Raphael LaRocca

“Who You Gonna Call?” by Howard Pierpont

Chairman’s Letter from Howard Pierpont: Getting Out the Preparedness Message

It’s a Disaster! (…and What Are You Going to Do About It?)

Costing out “The Big One”

Nominations Invited for the St. Andrews Prize for the Environment

Yamini in the news (India)

Planning for a Safer Tomorrow

Emergency Management as a Profession
By David T. Crews, CEM

Centers for Disease Control and Prevention

DERA - The International Association for Disaster Preparedness and Response

DERA and the DERA logo are Trademarks (™) of the Disaster Preparedness and Emergency Response Association, Inc. All material at this web site is Copyright (c) 1976-2020, DERA International. Permission for non-commercial use will generally be granted upon written request. Commercial requests will be considered on a case-by-case basis. DERA is a private, non-profit organization and is not affiliated with any government or national agency. DERA is recognized by the U.S. Internal Revenue Service as an independent 501(c)(3) charitable organization. Our tax identification number (FEIN) is 39-1777651. DERA is registered with GuideStar ® and our financial records are available for public inspection.

We send occasional notifications and information about DERA or current disaster situations.
We promise to use your email address responsibly.

The International Association for Disaster Preparedness and Response
2020 © All Rights Reserved.
Site Design by Picture This Creative Services